These two documents identify the dominant processes and habitat characteristics that currently limit the production of coho salmon smolts in the Scappoose Creek basin and in Milton Creek. The concept of these plans is a limiting factor analysis, identifying habitat conditions that restrict the success of one or more coho life history stages.

Milton Creek was historically a direct tributary to the Columbia river, and currently a watershed draining into the Scappoose Bay. The sub-basin comprises of 21,561 acres and contains 17.8 miles of mainstem stream corridor and 6.6 miles within five tributary corridors utilized by coho. 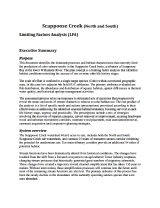 The Council worked with Oregon Department of Fish and Wildlife (ODFW) and a qualified contractor to conduct aquatic habitat inventories and a rapid bio assessment (RBA) of approximately 50 stream miles in Milton Creek, as well as North and South Scappoose Creeks.

Aquatic Habitat inventories are a way to assess the quality and type of habitat present in a stream system. Aquatic habitat inventories interpret a large amount of data pertaining to the stream characteristics. The data collected includes (but not limited to); type of channel substrate, classification of reaches into types of pool, riffle, glide, cascade, and beaver dams. There is also a large amount of collateral data collected; percent shade, composition of riparian area etc. This type of information is very useful for restoration projects.

The (RBA) or Rapid Bio-Assessment protocol is a scientific method to gather data on fish distribution and potential barriers to fish on a watershed scale. The surveys continue upstream to the end of fish distribution. As the surveyor moves upstream the contractor snorkels every 5th pool and describes the number and species of salmonid present, as well as any potential barriers along the route. The RBA protocol then takes this sample of the watershed and uses that to estimate adult salmonid use of the watershed and how much potential the watershed has of supporting more juvenile salmonid. This set of surveys (RBA), and (Aquatic Habitat Inventory) provides information on current use of the stream by salmonid, habitat conditions, and identify limiting factors to spawning and rearing in the watershed. The final report provides details on each of the creeks that were surveyed. 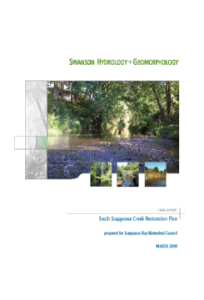 In 2000, the Scappoose Bay Watershed Council (SBWC) completed a watershed assessment for the streams and catchments that enter Scappoose Bay.

The watershed assessment identified several areas of concern affecting watershed and ecosystem health. Concerns include sediment delivery into Scappoose Bay, loss of high quality spawning and rearing habitat for salmonids, and incision within many of the primary channels. Of particular concern was the potential impact that channel incision has on channel and floodplain interaction and the ability of the stream to support and maintain the physical habitat features that provide for good aquatic habitat.

A five mile stretch of South Scappoose Creek that flows through the City of Scappoose was determined to have high priority for further assessment. This segment is characterized by an incised channel, severe bank erosion, lack of a continuous riparian corridor, a half dozen road crossing that have constricted the channel and floodplain, and urban encroachment into the historic floodplain. It was identified as a priority for further assessment due to local concerns about erosion and flooding and the opportunities to enhance conditions for salmon and other organisms that rely on high quality aquatic habitat. 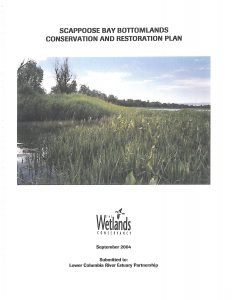 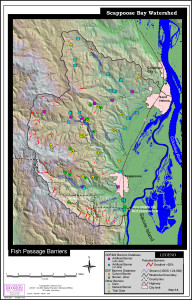 The Scappoose Bay Watershed Council has been working to replace culverts and other fish-passage barriers that exclude salmon and other fish from prime spawning grounds in the upper tributaries.

SBWC has worked with a variety of partners to remove or replace 40 barriers, opening up over 55 miles of creek for fish access. We have been systematically working our way through the watershed over the last several years to replace priority barriers.  In 2010-2011, we finished up work on Salmon and Cox Creeks and our next priority will be culverts along Dart Creek.

Site selection is based on the following watershed plans: A Comprehensive Assessment of Fish Passage Barriers in the Scappoose Bay Watershed (May 2001), Scappoose Bay Watershed Assessment (January 2000) and Strategic Plan (January 2008). The comprehensive barrier assessment, conducted on behalf of the Watershed Council, shows that barriers have a significant cumulative impact on fish habitat on most streams in the watershed. The assessment used biological criteria and findings of the Scappoose Bay Watershed Assessment to prioritize barriers for each sub-watershed and for the watershed as a whole. The priorities are based on whether the barrier is in a key sub-watershed (e.g. Scappoose Creek or Milton Creek), is a complete or partial barrier, and rank on a habitat index score (based on whether the barrier blocks access to upstream refugia and the length of potential upstream habitat).